Looking for the Best Budget Stand Mixer UK 2020 under £100? Check these top 5 leading cheap best food mixers under £100; they are quite affordable and worth the investment. 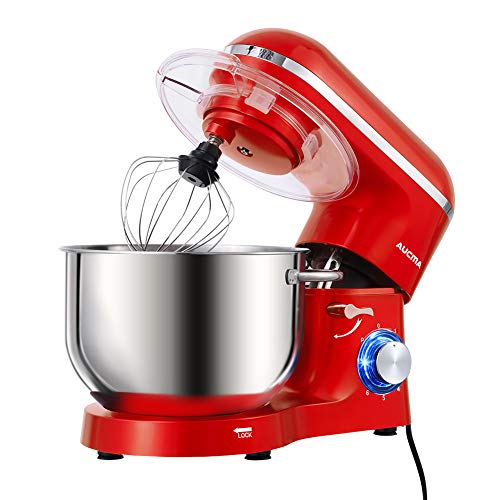 Mixers are essential in our day to day operations in the kitchen, and I guide you through the Aucuma stand mixer review. Even though there are many mixers, the Aucma 1400 watts Stand Mixer stands outs because of its 6.2 litres stainless steel bowl that comes with a see-through splash guard with chute to help you see how the ingredients are being mixed and allow you to add ingredients while the stand mixer is in action. The best part, its bowl has handles to help you move it around easily. It comes in black, red, silver and champagne colour variations to choose from.

It was under £100 at the time of writing but know under £110, a bit more but still good value for money. 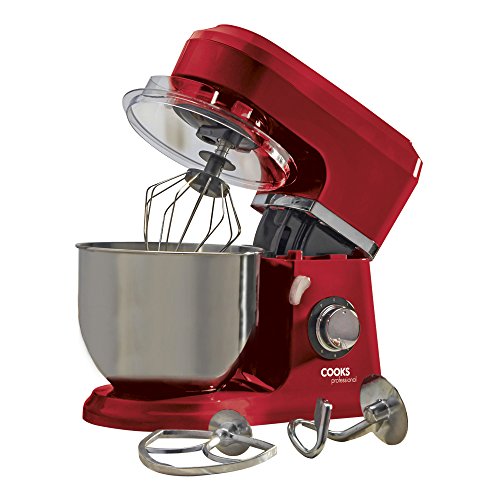 I have found this Cooks Professional 800W Electric Kitchen Stand Food Mixer under £100. It is the best budget stand mixer you can find right now. It comes in red, silver and cream colour option to choose from. 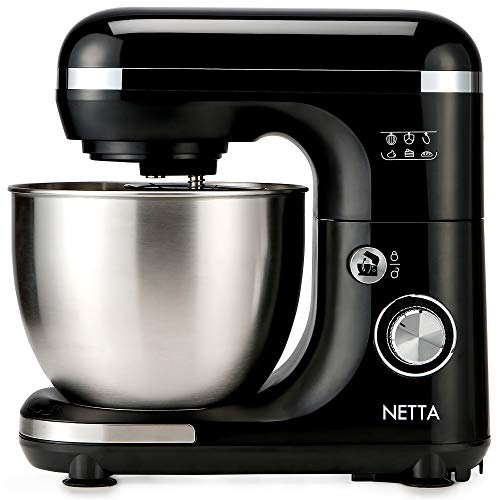 Like other top food mixers; the  NETTA Food Stand Mixer  comes with a good number of attachments.

For stability,  NETTA Food Stand Mixer consists of anti-slip feet. This is to keep it free from unnecessary shaking and falling while mixing.

Like many other stand mixer, this food mixer is also a bit noisy when in action. 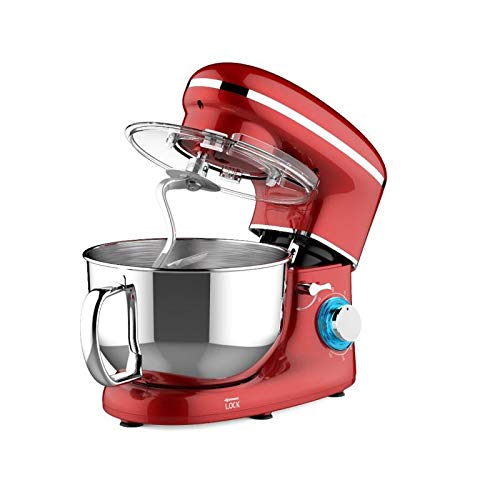 The  Heska -1500W Food Stand Mixer  Comes in 4 colours (Pink, Silver, Black and Red) so you can choose a colour that fits your style. Although it goes a bit over 100 quid, you get a large mixing bowl of 5.5 litres with the usual basic attachments (whisks, dough hooks and beaters). In addition to these, it also has attachments for dishwasher.
The Heska -1500W Food Stand Mixer – 4-in-1 runs on a top-performing motor powered by 1500 Watts a 6 speeds, With this power and speeds, you can virtually anything with it.

Its made of stainless steel with only a few parts that are of plastic, It features a pulse function for complete mixing. In spite of the powerful motor, this mixer operates on low noise.

The  Heska -1500W Food Stand Mixer  obviously has a large mixing bowl for mixers of budget range and 4 attachments that include a metallic beater. It also comes with two belts for decoration and a safety lifting switch for your convenience.

Cons:
It is a bit noisy on high settings.

All in all, this is a reliable best budget kitchen mixer that will give some functionalities like 6 speeds that can only be found in premium mixers, Although it has some plastic bits, it is sturdy and reliable and will give you value for money. Check it out here  Heska -1500W Food Stand Mixer – 4-in-1 Beater/Whisk/Dough Hook/Flex Edge Beater – 5.5 Litre Mixing Bowl with Splash Guard (Red) New Dishwasher Save ATTACHMENTS.

have found this Tower T12033RG Stand Mixer under £100. It is one of the best selling budget stand mixers on the market right now.

Even with its very compact design, the power output of the motor clocks in at 300 watts, which really is not too bad for a small mixer. The  Duronic SM100 /BK Powerful Electric Food Stand Mixer  is easy to clean and easy to put away.
Cons
At a quick glance, it is actually a great concept. To have a mixer made for efficiency and grind work, and make it compact enough to be easy to store away as well as clean. You can easily take the  Duronic SM100 /BK Powerful Electric Food Stand Mixer out and set it up when you need to start your preparations, and stow it away in a small shelf when you are done. You can even just set it down in a corner. 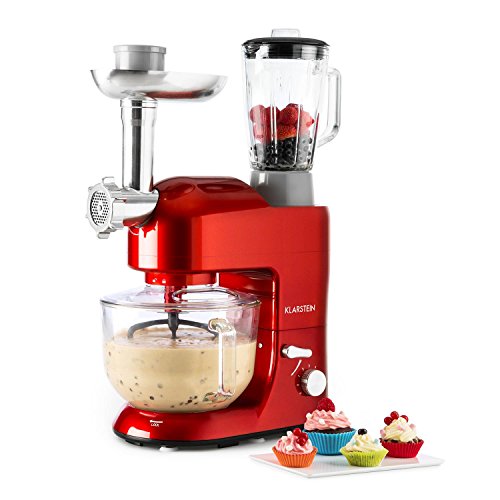 Another best stand mixer on a budget is this Venga! VG M 3014 Food Processor and Mixer with Bowl – 1000 W Motor, Plastic, Stainless Steel, 5 L, Black. You get it under £80
They name it a food processor for marketing reasons, but it actually a full functional stand mixer

The Breville Twin Hand and Stand Mixer,Silver is pearl white all over, with a stainless steel bowl that can hold 2 litres of the mixture.
It stands at the dimensions of 24.5cm x 33.8cm x 31cm and weighing at 3.9kg, making it rather easy to carry and move around, although still keeping it still and sturdy on a counter top.
However, how will the Breville shm2 twin motor compact mixer keep up with the competition? Let us break it down.
Highlights

. Breville SHM2 Twin Hand and Stand Mixer Reviews
As Compared to Kenwood food mixers; The  Breville Twin Hand and Stand Mixer,Silver  twin motor compact food mixer is rather small, and will let you stuff it in any corner or tiny shelf when not in use, or you could simply leave it on the counter as it will not take up much space.
Breville shm2 twin motor compact mixer is made of durable, stainless steel; It can accommodate 2 liters worth of liquids and 1 kilogram worth of dry foods.

With the general information out of the way, we can finally sit down and look at what really sets this Breville shm2 twin motor hand and stand mixer apart. There are a lot of mixers, and other mechanical kitchen companions for that matter, out on the market today. Some are very expensive, some are cheap, and some are in between.

However, while sometimes automated beaters do the job just fine, sometimes you want to be more hands on with the mixture. You might want more control, or perhaps the mixture being prepared is simply thin or light enough to handle by hand. The mixer is detachable, allowing you to do just that.
Accessories
The breville shm2 twin motor hand accessories that come with it include:

Pros & Cons
Compared to Kenwood food mixers; This mixer is rather small, and will let you stuff it in any corner or tiny shelf when not in use, or you could simply leave it on the counter as it will not take up much space.
The stainless steel design applies to both the bodily structure as well as the accessories- which means that both will be quite sturdy in the face of the chunkiest batter, as well as easy to clean.
No mixer is perfect however, and there are good and bad bits about each one. Before making a decision, see how your priorities will come into play in terms of this purchase:
There have been complaints about the motors making too much noise, as well as the fact that some specific mixtures will be making a mess regardless of the speed.
All in all, the pros heavily outweigh the cons, and the Breville shm2 twin hand and stand mixer is a sturdy, reliable piece of work with enough features to take care of most preparation jobs.
Check this  Breville Twin Hand and Stand Mixer,Silver .

Like any other top food mixers like Kenwood; the  Kenwood Prospero KM240 Stand Mixer, Powerful and Practical Food Mixer in Silver, with K-Beater, Dough Hook, Balloon Whisk and 4.3 Litre Bowl  comes with 3 basic attachments: beaters, whisks and dough hooks for mixing and kneading ingredients in addition to a mixing bowl.
It is powered by 900 watts motor.

Pros:
The Kenwood Prospero KM240 Stand Mixer is easy to use, clean and store. It is lightweight compared to Kenwood mixers.

Cons
The  Kenwood Prospero KM240 can be a bit noisy and the splash guard can get fiddly at times.
Sometimes we do not need to have the biggest mixers available in order to do our cooking. Not all of us are preparing loaves of bread and boxes of cakes on a regular basis, and some of us just need a kitchen companion to make our average preparation easier and more efficient; this Morphy Richards stand mixer is more than enough for a small family.

They name it food processor for marketing reasons, but it is a full functional stand mixer.

Which is your Best Budget Stand Mixer UK 2020 so far?

Scroll back to top

By continuing to use the site, you agree to the use of cookies. more information