You can use the Nutribullet blender for so many things namely: making hot soup and sauces from scratch in 7 minutes using the latest Nutribullet Rx blender, Creating NutriBlast smoothie and drinks, Crushing ice, Creating salad dressings and dips.

Notice: The more powerful the Nutribullet blender is, the quicker it processes the ingredients. For instance 1700watts machine is more powerful than the 1200 or 600 watts (find reviews of each model below). 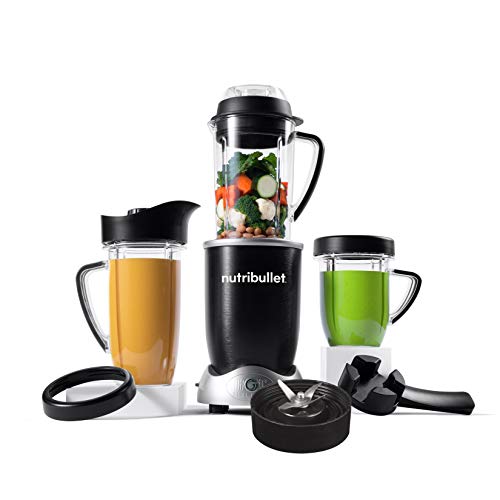 Nutribullet Rx Blender and Food Processor is the latest Nutribullet blender with more value added features than previous models. The main additions to this model are the ‘Souperblast mode (heat cycle)’ , ‘soup pitcher’ and a more powerful motor. The machine has a Souperblast mode which is a seven-minute heating cycle that turns raw ingredients into hot soup and sauces. This implies that for you to make soup from scratch, you just need to add ingredients in their raw form press the button and let the blender do its work.

The Rx is powered by the 1700 watts motor compared to 1200 of the 1200 series or 600watts of the first entry-level, Nutribullet 600 series. However, despite the motor strength, all machines are capable of crushing ice in case you want to add some ice cubes in your drinks during summertime. The blender has a maximum capacity of 1278 millimeters.

The Nutribullet Rx Blender and Food Processor also the same as the Nutribullet 1200 and 1000 series feature One Touch Auto Smart Technology (preprogrammed cycle) that when touched cause the Rx to spin around with small burst and then continuously until everything is blended perfectly.

Apart from the key features discussed above, others include:

Despite this Nutribullet Rx having more features and capability, it has low ratings compared to other Nutribullet models. Most of the complaints are related to leakages at the bottom and inability to make a nice soup. An alternative to this is going for Vitamix and enjoy a delicious soup at the press of the button as there is no other Nutribullet blender that is capable of making soup except of this Nutribullet Rx Blender and Food Processor . Others are just at making smoothie mainly. 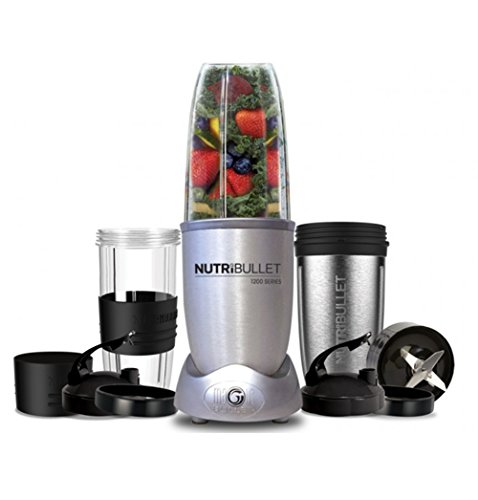 1200 Series – Smart Technology High Speed Blender – 1200W 12 Piece Set – Silver[/easyazon_link] also features a preprogrammed cycle that work at the touch of the button. If you do not touch it the machine will work continuously until you stop the machine. But with this one-touch auto smart technology the machine blends until it thinks what you are making is ready and then stops automatically.

Instead of three cups that come with the rx, this 1200 watts blender comes with two travel-friendly colossal cups with 930ml volume capacity each. This is quite handy when you want to take your drink on go.

You also get a recipe book to get you started and a one year warranty, same as other Nutribullet models.

The machine is strong enough to crush ice, seed, whole fruits and more.

Despite its strength, you cannot use this Nutribullet blender to make soup from scratch as it does include a soup pitcher not does it features a ‘Souperblast mode (7 minute heat cycles)’ setting for making soup as found in the rx .

If you want to make soup using this blender, you have to pre-cook the ingredients, wait until they warm or cold and then blend them.

Otherwise like all Nutribullet blenders, this NUTRiBULLET 1200 Series – Smart Technology High Speed Blender – 1200W 12 Piece Set – Silver is easy to use, clean and store. You just need to rinse it under warm water. 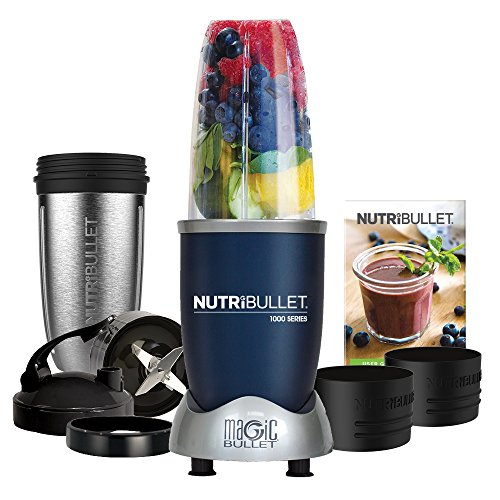 NUTRiBULLET 1000 Series Blender 9-Piece Set with Smart Technology is moreless the same as the 1200 series but with less power, 1000 compared to 1200 watts. Instead of two cups of the same size the 1200, you get 2 cups of different size instead, 930ml power base cup and an 820 stainless steel cup.

It also includes a one-touch button, user manual, recipe book, and a one year warranty. At the touch of the auto smart button, the machine knows when to speed or slow down and turn off automatically.

To use the machine, simply add the ingredients in the container, place it on the power base, twist the cup to lock it up, touch the auto smart button and let the blender do its work.

On the downside, as with 1000 series, you cannot also use the NUTRiBULLET 1000 Series Blender to make soup from the scratch 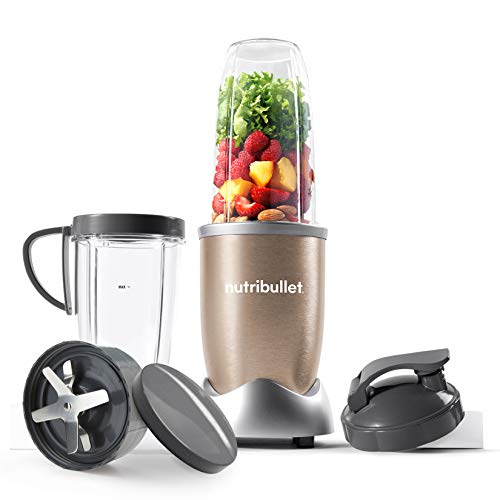 NutriBullet 900W Blender is an upgrade of the original 600 series model. It has a power increase from 600watts to 900 watts.

This blender also included two travel-friendly cups the same as the 600 but a bit bigger, 909ml compared to 680ml of the 600 series. Just remember not to overfill your cup, when making smoothies or when packing it. This is to prevent leakage.

Otherwise, this blender like the 600 series has no other advanced features like a heat cycle, one-touch button and a soup pitcher as found in the rx blender. However, this is the only Nutribullet blender that is available in Champagne finish. 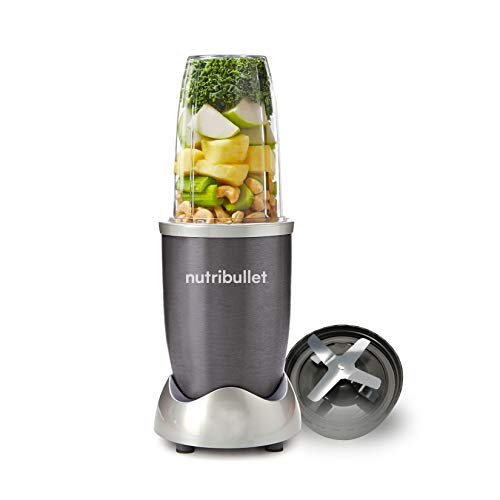 NUTRiBULLET 600 Series – Nutrient Extractor High Speed Blender is the original Nutribullet blender with basic features for making smoothies on a go.It features a less powerful motor (600watts) as compared to other models from this brand. However, it is still powerful enough to make smooth Nutriblast smoothies as other with only difference that it takes longer than others.

No soup pitcher, heat cycle or Auto Smart Technology as compared to the latest Nutribullet Rx Blender and Food Processor .

By continuing to use the site, you agree to the use of cookies. more information